Good writers never stop learning their craft, and the best teachers are other writers. My most recent lesson came from J. K. Rowling, a.k.a. Robert Galbraith. 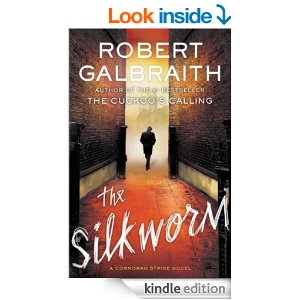 Very few books in a lifetime of reading have delighted me as much as the Harry Potter series, so naturally I was eager to read the adult novels that followed them. The Casual Vacancy was a disappointment, lacking even the ordinary magic of storytelling. But the two books that followed, The Cuckoo’s Calling and The Silkworm, published under the pseudonym Robert Galbraith, showed Rowling back on track. They are wonderfully absorbing novels, hard to put down once begun.

Of course, writers can’t simply enjoy stories without poking and prodding the mechanism, trying to see how the thing works. I recognized some of the standard ingredients of good fiction: tangible settings, the skillful use of suspense, colorful secondary characters, and two exceptionally likable main characters in private detective Cormoran Strike and his assistant, Robin. As I read The Silkworm, it struck me that Strike and Harry Potter actually have a lot in common. They are both orphans, in Strike’s case functionally rather than formally, since he has a living but estranged father. And  both have painful physical problems. For Harry it starts with the scar on his forehead that burns periodically but goes far beyond that.  Everything he does to achieve his goals comes at a cost that is very often dangerous and painful. There’s a line in one of the books in which Ginny, seeing Harry enter the Great Hall, says, “He’s covered in blood. Why is he always covered in blood?”

Cormoran, who lost part of a leg to a war injury, has an ill-fitting prosthesis that causes him great pain throughout much of both novels. At one point in The Silkworm, he is unable to fit the prosthetic onto his swollen stump. Does he seek out medical help, like any normal person would? Of course not. Lives are at stake, a fiendish murderer is on the loose, and an innocent woman stands charged. He continues the chase on one leg. 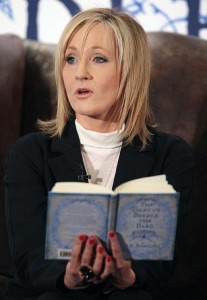 Cormoran, like Harry Potter, sacrifices himself to save others. I would hardly be the first to observe that the Harry Potter books are imbued with Christian theology and symbolism, or that Harry himself plays the role of Jesus, sacrificing himself so that others may live (although the Harry Potter books have a happier ending.) But Cormoran’s disability is less germane to the novels’ plots, and thus in a way more interesting. Its main purposes, as far as I can tell, are to make the character nobler and more sympathetic, and to create additional obstacles in his path to success. Rowling succeeds in both respects.

When solving a crime is just a job and the process unfolds intellectually, readers can enjoy the puzzle-solving aspect without getting deeply involved with the characters. But when the detective has flesh in the game, it’s a whole different level of story. Because I felt Cormoran’s pain subliminally throughout the story, there was an under-layer of discomfort to the experience of reading that lent a sense of urgency and fed my impatience for a resolution. I wanted him off that leg!

Mark Twain once said that his way of telling a story is to chase his protagonist up a tree and throw rocks at him. The harder we make life for our protagonists, the greater the obstacles they have to overcome, the more readers will care. One of the problems I see in a lot of student fiction (and occasionally in my own) is that writers feel too much for their protagonists and thus take pity on them. But writing requires a certain level of ruthlessness. Sometimes, to be kind to our readers, we must be cruel to our characters.

5 thoughts on “WHAT I LEARNED FROM J. K. ROWLING”