The three most important things about property, agents will tell you, are location, location, and location. It occurred to me recently, for reasons I’ll get into in a moment, that this adage applies not only to real estate, but also to not-so-real estate: the settings of novels.

A few weeks ago, I was in Israel. I’d lived in Tel Aviv for twelve years, and had been back many times since, but this time we were there for the happiest of reasons: the marriage of our son. As the family was going over en masse, I had arranged for the rental of a large Tel Aviv apartment that, coincidentally, was five doors down from the house in which my husband and I lived when aforesaid son was born. It seemed an auspicious location, so I was disappointed to hear from the landlord, a week before our arrival, that the building was undergoing a major renovation with all the attendant noise and dust. He offered us an alternative: an apartment on tiny Byron Street—two doors down from my husband’s childhood home. Which just goes to show what Tel Aviv is like. Though it’s grown tremendously in the nearly thirty years since we left, at heart it retains its villagy feel. Every place evokes other places, other times; and people know each other. Instead of seven degrees of separation, it’s two or three, tops.

On the last night of our stay, we went out for a final stroll down Dizengoff. Most of the shops had changed hands since we’d lived there, but the mix of cafés, boutiques, bookstores, galleries, tourist shops and juice bars seemed roughly the same. I’d bought my wedding dress off the rack in one of those boutiques, gone now, and celebrated with a torte at Café  Royal,  the best pastry shop on Dizengoff, and  a haven for Tel Aviv’s “Yekkes”—German Jews. Just remembering that cake made my mouth water, but the Royal was gone, too, as was its grungy nemesis across the street, Café Kassit. 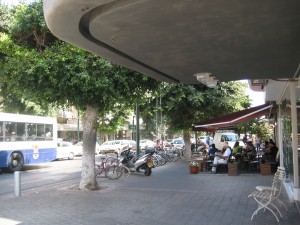 Grungy it may have been, but Kassit was the social nexus of Tel Aviv’s cultural and intellectual worlds, the café where all the writers, artists, publishers, playwrights and poets sat. In Steimatzky’s bookstore,  a few stores down, a person  could peruse new releases in the Hebrew literature section, then walk down to Kassit and find half the authors sitting there. If a missile had struck the cafe on a Friday afternoon, Israeli culture would have been pulverized.

But intellectuals weren’t the café’s only patrons.  Kassit had started as a workers’ lunch stand when Dizengoff was just being built, and you didn’t need a college degree to drink there. Politically it canted hard left and secular, but in that it was a microcosm of Tel Aviv as a whole. Where you sat was who you were, and bad behavior abounded. Sitting in Kassit on successive Friday afternoons, you could track as if by stop gap photography the progress of liaisons and feuds, flirtations and rivalries.

In those days I was a literary agent by day, writer by night. I worked too hard and made too little to spend much time in cafés, but when I did meet friends or clients outside, there was never a question about where. My second novel was conceived in Kassit, and set there.

I called it  “Café Nevo,” but any Tel Avivan would have recognized Kassit, home to a disparate set of lost souls whose lives converged within it. Café Nevo was both a haven and, like its Biblical namesake Mount Nevo, a vantage point onto the unattainable. Madeleine L’Engle called the book a fugue; which (leaving aside the wonder of Madeleine L’Engle calling it anything at all) struck me a smart and accurate analogy for the novel’s structure. My café was modeled on Kassit, not the thing itself, which could not have been encompassed in a novel; but it was also a tribute to an institution I’d thought would last forever. But Kassit was gone, long gone. It existed only in the memories of its patrons…and, in a way, between the pages of my novel, where its fractious customers are forever presided over the café’s  tyrannical waiter and secret owner, Emmanuel Yehoshua Sternholz. 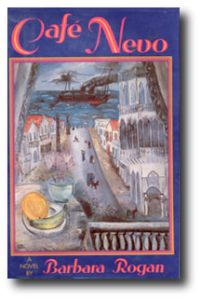 I thought about this, as we strolled along Dizengoff on that Saturday night. The city was coming to life all around us, rousing from its long Shabbat nap. Stores were opening, cafés spilling out onto the pavement.  Bicycles darted between pedestrians, scooters between cars. It was time to eat. Between Frishman and Gordon, we stopped at a café and took an outdoor table. Inside, the restaurant looked shiny and metallic, with sleek European design.  The place felt familiar, though I was certain I’d never been here before.

My husband looked up and down the street. Then he beckoned the waitress, young enough to be our grandchild. “Wasn’t this Café Kassit?”

She looked blank. “Before my time, if it was. I’ll ask.” She was back in a moment with the answer. “It was Kassit, a long time ago. There’ve been two different owners since.”

We looked at each other. “Like homing pigeons,” my husband said.

Cafe Nevo was published in 1987 by Atheneum and reprinted a year later by Plume Books. I’m delighted to announce that it will soon be reissued as an ebook and in a new paperback edition. In the meantime, used copies are readily available through Abebooks.