Sorry to be late with this post. I spent the last few days recuperating from a movie I saw over the weekend. The Words is about a writer who plagiarizes the work of another writer, gains fame and fortune, and is then confronted by the real author. It should have been a good story, if not a particularly cinematic one. Instead, it was a particularly egregious offender in a long line of terrible movies about writers. 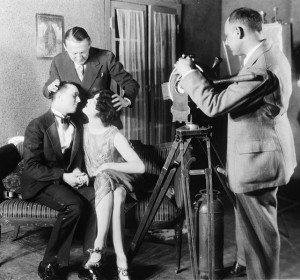 Part of the problem is surely that it is so difficult to make anything dramatic of the writer’s process. If you were to set up a WebCam in front of my computer, here’s what you would see: Writer stares at screen for 20 min.; writer types a sentence; writer stares at screen. Repeat.  Not exactly the stuff of scintillating cinema. Moviemakers, and readers in general, tend to mistake the product for the process. The most exciting book in the world is written in the same sedentary fashion as the most tedious.

Naturally, filmmakers need to spice it up. Teeth are gnashed, hair is ripped out at the roots, grooves are worn in old wooden floors. Shakespeare In Love was one of those: an otherwise estimable film that couldn’t resist tarting up the writing process with histrionics, as if the plays were written not in ink but in blood. The Words featured an early montage of such melodramatic agonies of creation. I smirked, but with a sinking sensation. Next came the scene in which a publisher summons the writer, praises his book to the skies, and then declines to publish it. I nearly choked on my popcorn. As if!  Filmmakers go to immense pains to make every detail of their police and CIA procedurals as realistic as possible. Why, then, is it okay to write such a ludicrous scenes about the writer’s life? No publisher ever calls a writer in to reject his work in person. It is done through intermediaries: his agent, if he has one, or an e-mail, or simply through no reply. When I saw that scene, I knew I was in trouble. The film also had difficulty differentiating between the roles of publishers and literary agents, very basic stuff. And when it quoted from the miraculous purloined book in question, the prose was so flat and boring (think Hemingwayesque, if Hemingway had had a tin ear instead of perfect pitch) that the whole premise of the story was undermined.

According to the movies, lots of writers are psychotic. It seems to be a professional hazard. See Meryl Streep as the romance novelist from hell in She Devil. Johnny Depp develops a split personality in Secret Window, while in As Good As It Gets, Jack Nicholson suffers from multiple psychological problems. Writers are always being pursued by characters from their own books (especially if the book in question was written by Stephen King) or vengeful fans (ditto). You’d never see writers in films as they are in real life: working stiffs with kids in school and mortgages to pay.

Still, every once in a while, a film gets it gloriously right. I loved Mrs. Parker and the Vicious Circle,  the story of Dorothy Parker, played by Jennifer Jason Leigh, and the Algonquin Round Table: the writers’ Camelot

brought to life. Capote was a brilliant movie about a writer who falls in love with his subject but sacrifices him for a better ending to his book. I felt it says something true about writers. And who could forget the Coen brothers’ hallucinatory Barton Fink? John Goodman as Satan is perfect, and so is John Turturro as the aspiring screenwriter who vacillates in a very writerly way between hubris and terror.

How about you? What are the best and worst movies you’ve seen about writers?

12 thoughts on “Films About Writers: The Good, The Bad, and the Ugly”