My last post about the bloodsuckers who prey on writers stirred up some interesting discussions on writers’ forums that I frequent. One writer, Cammy May Hunnicutt, agreed that paid reviews and submission services exploit naive writers and provide no real benefit, but she questioned my assertion that the one thing worth paying for is education, learning the craft.  “People,” she wrote, “are dying to think they can spend some money and become ‘good’ writers.  Not really so.”

This is an interesting statement; and based on 15 or so years of teaching fiction writing, I have to agree with it, if by “good” we mean extraordinary, publishable. To get to that level,  there has to be some natural ability in the mix. But talent isn’t everything; it isn’t even enough. Writers need craft, too. We don’t make it all up from scratch each time we start a story. We learn stuff and build on what we’ve learned to do more, the same as in any art. Just as painters need to master perspective, so must writers master point of view. Just as musicians must learn structure to write fugues, so must writers  learn to structure their stories for maximum effect. These techniques can be taught to any reasonably literate, motivated person, so I believe that nearly everyone can learn to write better; and that is something most writers aspire to.

But Cammy, bless her, was not convinced. “‘[You say] ‘You can’t learn to be good, but can learn to be better.’  Let me ask you how much that counts for.  You see writers who are really sweet and don’t get published, others who write junk and make millions.  If I can use athletics as a metaphor, I’ve seen the workshops and camps and coaching.  And being ‘better’ is seldom good enough at the level that the average person can access.  I don’t see it as an investment that will return, but a money drain.” 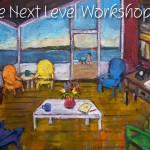 Cammy asks tough questions, but fair ones. It’s true that all the training in the world isn’t going to get a mediocre hoopster onto the Knicks. Writers who study with me are strongly motivated—they have to be, to participate in my strenuous workshops—and over the years, quite a few have gone on to publish.  I take enormous pleasure and pride in  their success–but they are a minority. The hard truth is, many of my students will never publish unless they self-publish. The bar to trade publication is extremely high, and even for the most talented, there are numerous obstacles along the way. So what is the point of writing classes for those who won’t achieve that? Could teaching itself be exploitative?

I don’t believe it. People deserve a chance to strive for their goal, however difficult it may be. Besides, you can’t always tell who will and who won’t end up getting published. I’ve been surprised more than once. Sometimes a genre gets really hot and the bar is lowered a bit as publishers scramble for material, so that agents and editors may be willing to take on a manuscript that needs more work than they’d normally invest. Other times I’ve seen students who start out with major deficits learn really, really quickly—just soaking things up because they’re ready for them. (See Mika’s story.)Where a writer starts isn’t necessarily an indication of where she’ll end up.

Some of my students are going to end up self-publishing their work–a statistical certainty these days. In those cases too, I think they’re doing a good thing for themselves and their books and their eventual readers if they learn all they can about the craft of writing. Doesn’t have to be through classes, either. A detailed critique by an editor or writer with serious chops (scroll down on this page for a list of things to look for in a writing teacher and editor) can be an eye-opener, serving not only to improve the work in question but to provide the writer with tools they can apply to everything they write thereafter.  If that’s not in the budget, there are excellent books on writing available, and libraries where they can be had for free.

To me it seems self-evident that writers, like painters and musicians, need to master the tools of their trade; but, as Cammy was brave enough to point out, I have a vested interest in believing this. So let me ask the writers among you to weigh in with your thoughts and experience on Cammy’s challenging question: Can writing be taught?

My purpose here is not to tout my classes; in fact, I’m taking a hiatus from teaching and editing for the next 4-5  months to work on a book. If, however, you are interested in taking one of my workshops when I resume, the best way to get in is to get on my emailing list, which you can do by emailing me at www.nextlevelworkshops dot com.

17 thoughts on “Can Writing Be Taught?”